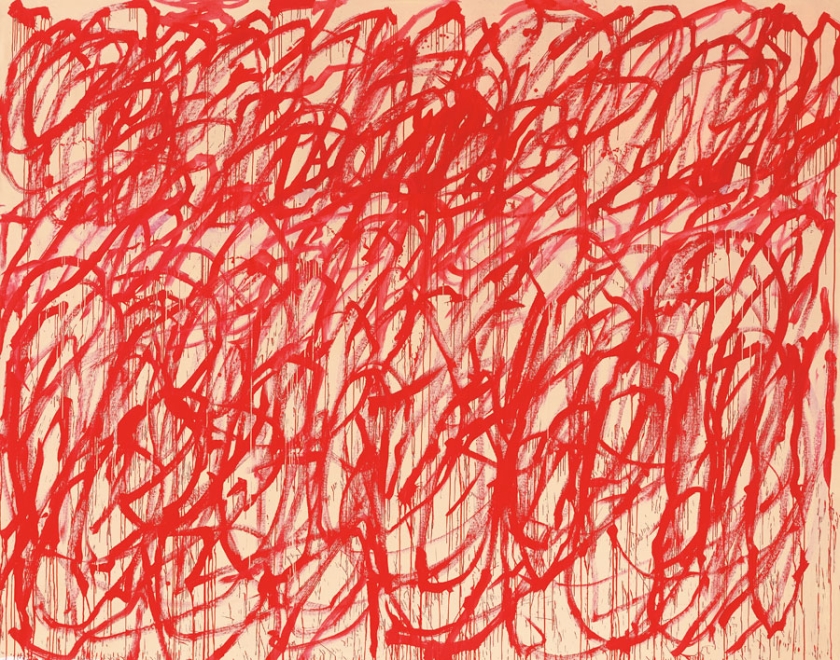 Apart from being inaugural shows there might not appear to be much common ground between Cy Twombly’s colossal meshes of looping marks in Gagosian’s new Grosvener Hill space and the Rudolf Stingel paintings on show at Sadie Coles’ new space on Davies Street and the existing Kingly Street venue. When it comes to artworks, the interpretive process can often involve making less than obvious, sometimes even forced connections in order to illustrate a viewpoint. So why not compare two apparently different shows if it serves to expand on issues of medium; in this case paint being the medium under discussion?

Cy Twombly’s paintings often elicit the response that they are condescending to the viewer in their simplicity, that they are painting’s response to the unmade bed. And many of the marks do look as though they followed the path of least resistance. They could be marks made by an idle colossus testing the largest marker pen in the world. The loops might seem to correspond to the orbit of an arm that has stopped wondering where to go next with the brush. There is not enough variation in the marks or the palette to reward the eye that is hungrily looking for variation in marks and palette. Twombly’s work was never about quick fixes of virtuoso paintwork. His marks demand an unexpected amount of time from the viewer; time in which we scan and differentiate between gestures and assimilate the collective impact they make on us as we stand in their shadow. For painting that looks so immediate, these epic doodles have an impact which is as much physical as it is visual. They are paintings which are much more than the sum of their parts.
Twombly’s marks could be said to be repetitive in the sense that they are the product of similar gestures repeated across the canvas. Seen from a distance they are meshes of loops and these meshes lean slightly to the right; further evidence of the body which made them. As mark making, they may not be as immediately gratifying as Jackson Pollock’s drips. Pollock’s drips however, employed a hidden tool with which the artist was able to conceal the mark of the hand. In allowing momentum to take control of the medium as it travelled through the air from the end of the swiftly moving brush, Pollock was, from a certain point of view, encoding his gesture. Twombly’s marks are direct. There is no mediation between the brush and the canvas. The paint is on the brush and the brush is on the canvas, and the gestures are made directly. But with the exception of marks such as Pollock’s, isn’t almost all painting made directly by brush on canvas?
When we talk about painting, there is more to be gained by dealing with different aspects of a work individually, rather than trying to arrive at an over-arching view of the work as a harmonic single object. We can discuss Twombly’s paintwork as an attempt to choreograph marks to appear random. In terms of distribution of marks we could say that they share the all-overness that Clement Greenberg spoke of in Pollock’s work. Some of the works here are also colour field paintings of a sort through their repetition of monochrome gestures which threaten to obliterate the light ochre ground beneath. The drawings with clusters of almost legible writing and mysterious geometric shapes could be seen as walls of graffiti on which one tag has attracted another. It is unlikely that Twombly was not aware of all of these possible readings. Each one on its own is worthy of far more discussion. A problem might emerge when we come to reconcile these observations about the work of paint in Cy Twombly’s canvases with the titles he chose for them. Hans Hofmann made various claims for his paintings which nowadays can act to disrupt the discussion of his paintwork. It can be hard to reconcile the sophistication of Hofmann’s arrangement of marks on canvas with his esoteric pronouncements about his work. In Twombly and Hofmann there is arguably enough going on in the paintwork alone to allow the viewer to make their own ruminations on how paintwork can be analogous to so much else in the world. 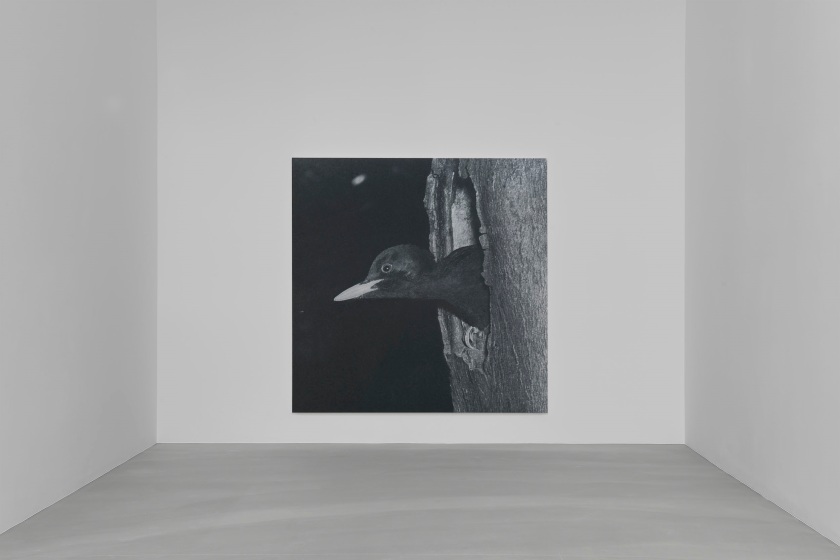 Installation view, Rudolf Stingel, Sadie Coles HQ, London, 04 November – 18 December 2015
Copyright the artist, courtesy Sadie Coles HQ, London
In Cy Twombly the viewer might find themselves squinting to perceive signs, images, breaks in the patterns which might speak to us of things being referred to. In Rudolf Stingel’s current paintings in Sadie Coles images disappear as we get closer. These are paintings, some on a sizeable scale, composed of hundreds of thousands of brush marks. They are photorealistic paintings, laboriously, methodically executed. As paintings which are meant to look like photographs they are hugely convincing and have an archive melancholy that is masterfully maintained across every inch of every canvas. And yet they are more than that alone. Perhaps the most interesting element of this series is the paintwork itself. The marks are not pointillist. They don’t have uniformity and definition as brush marks. For the same reason they can’t be seen as analogous to pixels. In fact the individual brush marks appear to lose all power to form fields of visual information the closer we get to them. 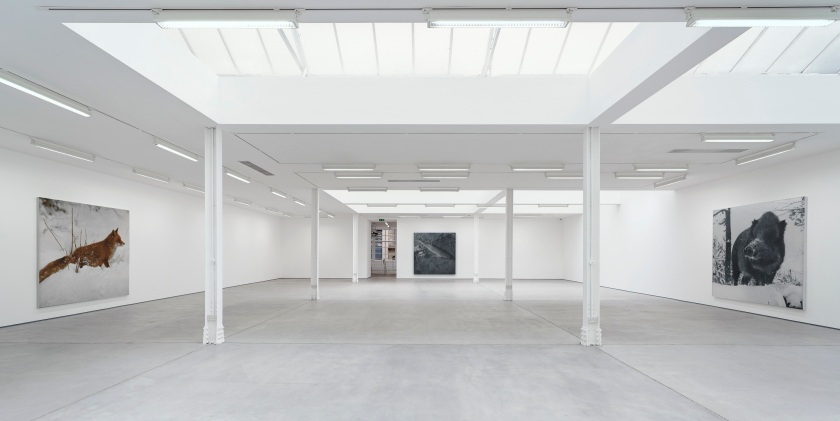 As images these paintings each represent a solitary animal in a wilderness. They could of course be animals roaming around the periphery of an urban area. Each animal is poised as though listening, deliberately frozen in anticipation, lending added tension to the melancholy within the canvas. There are several areas of the canvases which depict either the blackness of a forest at night or snow covered ground. To the observer primed to examine the paintwork these areas are as interesting as the features of the animal subjects. Areas of white fur delineated against snow, tree bark next to bird feathers; achieving a convincing distinction between these textures on such a grand scale takes no small amount of skill. As we lean in to examine the brushwork that has succeeded so well in convincing us that we were looking at photographs, we are surprised to see order break down. Instead of millions of uniform pixels, what we see is an infinity of apparently unique gestures made with the end of the brush. Each mark looks as deeply considered as the next.
Whether or not Stingel intended for his paintwork to be examined up close, or whether he was simply executing a series of works which had been conceptualised to a high level of completion ever before the canvas was even primed, the effect of composing such convincing images with tiny brush marks was always going to foreground the medium of paint. Why bother going to such effort to create these painstaking paintings if one of the main things you want to say is not about the power of paint, not just to transmit meaning, but to hold meaning. Stingel’s stoic, lonely subjects disintegrate the closer we get to them. What started as an evocative image of an animal becomes no more and no less than an abstraction; paint on canvas. The works in these two shows are striking, immediate paintings which require time and slowness from the viewer to be fully appreciated.