The opening pages of The Portrait of a Lady by Henry James take place against the backdrop of a garden as neat as a Nineteenth Century drawing room. James could evoke the intimate and the domestic spaces of privileged life like few other writers. The action, which would normally take place inside, unfolds instead in the garden. In this instance the garden has become a continuation of the interior space. It is even described as such. “Privacy here reigned supreme, and the wide carpet of turf that covered the level hill-top seemed but an extension of a luxurious interior.” (1)

Against the backdrop of the industrialised Nineteenth Century, with the modern city growing in the background, the private garden was becoming not only a pastime, but an artistic subject in itself. Public parks and other communal garden spaces were also developing. But it is the intimate space of the private garden, glowing in the dense stillness of a summer’s day, that is the most common component of the current show at the Royal Academy. If the garden, by the end of the Nineteenth Century, had become a private space of leisure for a comfortable minority, it had also become one of the principal subjects, along with the domestic interior, for an artist to master. The garden space, as distinct from landscape, is a subject which arguably lends itself more to a discussion of medium than subject matter. The domestic garden, along with the domestic interior, relates to the artist and the viewer on a very human scale. Some of the most interesting works in the show, from a painter’s perspective, are those in which there is little or no reference to perspective, scale or depth of field. These are paintings which might comfortably be carried with outstretched arms, perhaps even from the garden to the studio and back again. They are paintings in which the subject so fully occupies the picture plane as to become flattened, thus leading us into a more intimate examination of the paintwork.

The domestic interior as a subject in painting was a space within which all figurative elements: pieces of furniture, statuettes and plaster casts, bowls, rugs, windows and even people were often given the same importance. This democratisation of all pictorial elements was carried through with a lifelong consistency by Braque in his studio interiors, and, as can be seen in the present show as represented by two strikingly spare canvasses, by Matisse. The room itself becomes a kind of shallow display cabinet of forms of equal value. Figures are no longer shifting forward or receding in scale. Instead, they interact within a flattened plane.

The private garden with its arrangements of domestic and exotic flower and plant species, ornamental garden features, and the lawn or the hedgerow acting as a sort of neutral ground, provided a painterly space of the same order as the domestic interior. There are plenty of choices in this show which could be seen as reinforcing the notion of Impressionism as pure visual pleasure. For the artists however, it wasn’t always a pleasurable process. Monet spoke of painting as ‘continual torture’. And it is hard to imagine a more difficult subject to paint than an undifferentiated field of plants in full bloom. In any case, not all the work on display is, strictly speaking, Impressionist. Henri Matisse, Wassily Kandinsky and Paul Klee are represented in the later rooms with canvases which are clearly looking at the subject of the garden with a new-found awareness of the developments underway in painting.

However, the most convincing argument for the power of paint beyond image-making is made by Monet through the famous Water Lily series.  The artist worked on the fringes of his water garden in Giverny between 1914 and his death in 1926. The panoramic canvases, which are his best known of the series, are dependent on their large scale to such an extent that it is difficult to know if they can really be spoken about as being from the same series as the much smaller canvases of the same subject. These larger canvases involve the viewer on such an experiential, physical scale that they no longer seem to be paintings alone. By virtue of our sheer smallness in front of them, we are once again within the image. In the inverse of the way we might imagine ourselves reclining in the dead heat of summer, on a cool flat lawn, when we look at some of the smaller more ‘pictorial’ works in the show, we feel as though one wrong step in front of Monet’s gigantic canvases and we risk tumbling into the lily pond. 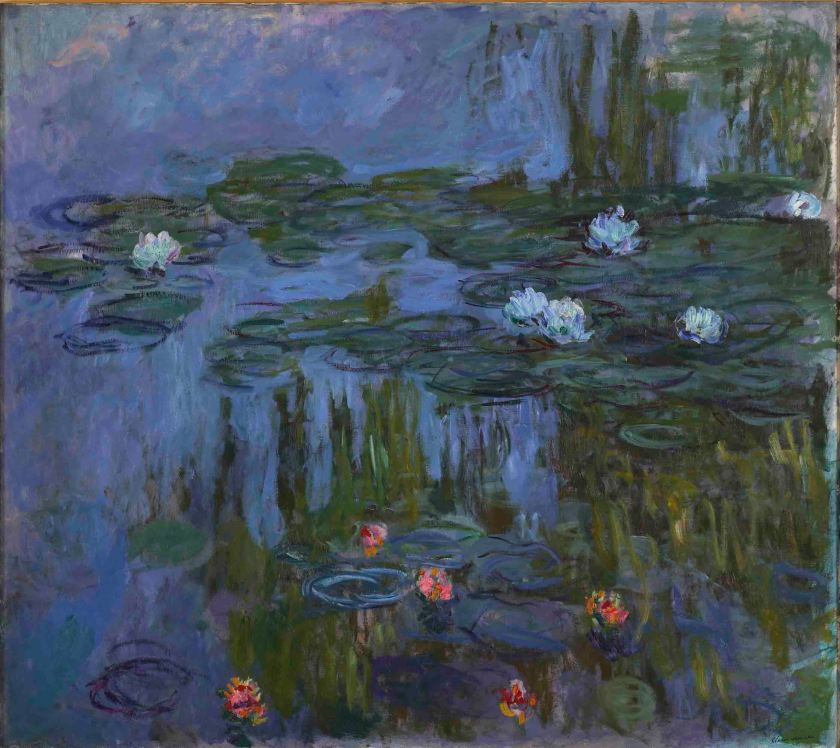 Scale is critical in painting. The decision to blow up the dimensions to a cinematic level changes every aspect of the work. Monet, by expanding the field of his Water Lily canvases, could be seen as pre-empting the experiments of a later period in the history of modern painting. It would be quite a convoluted association to make however, to claim true similarity of intent in the practices of Monet and Rothko for example. I find it more comfortable to suggest that Monet’s larger Water Lily canvases create a more theatrical space; one in which the viewer can no longer hold the painting at a metaphorical arm’s length.

As with Monet’s super-sized canvases, large scale paintings of interiors also force the viewer into an appreciation of the depicted space which necessarily involves their own body. Could the viewer’s space for example be an extension of that of the painting and vice versa? The smaller Water Lily canvases address the subject on a scale which neither reduces its effect to that of illustration; true pictorial space, nor inflates it to a scale where the intellectual richness of the paintwork becomes swamped by visceral physicality involving our own bodies. When limited to the scale of a comfortable arm’s span, the Water Lily series invites many enticing speculations. For example, are these works in fact upside down?  The water occupies the majority of each canvas; but it is the inverted reflection on that water of sky and foliage which constitutes the image which we ultimately register. The lilies themselves are suspended somewhere between water and sky as there is no perspectival reference point except for the slight difference in size between the flowers at the top of the canvas and those at the bottom. The paint itself sometimes disappears near the edges of the canvas; whether or not this was intentional on the artist’s part, the effect is to add to the feeling of zero gravity. These are just some of the questions which these profound paintings raise. Staring into their depths, it is even more remarkable to think that the artist was painting them during a time of upheaval, with the sounds of war audible even in a clear blue sky.
(1) “…The great still oaks and beeches flung down a shade as dense as that of velvet curtains; and the place was furnished, like a room, with cushioned seats, with rich-coloured rugs, with the books and papers that lay upon the grass.” Henry James, The Portrait of a Lady, Penguin Books, London, 2003, pp 60, 61.