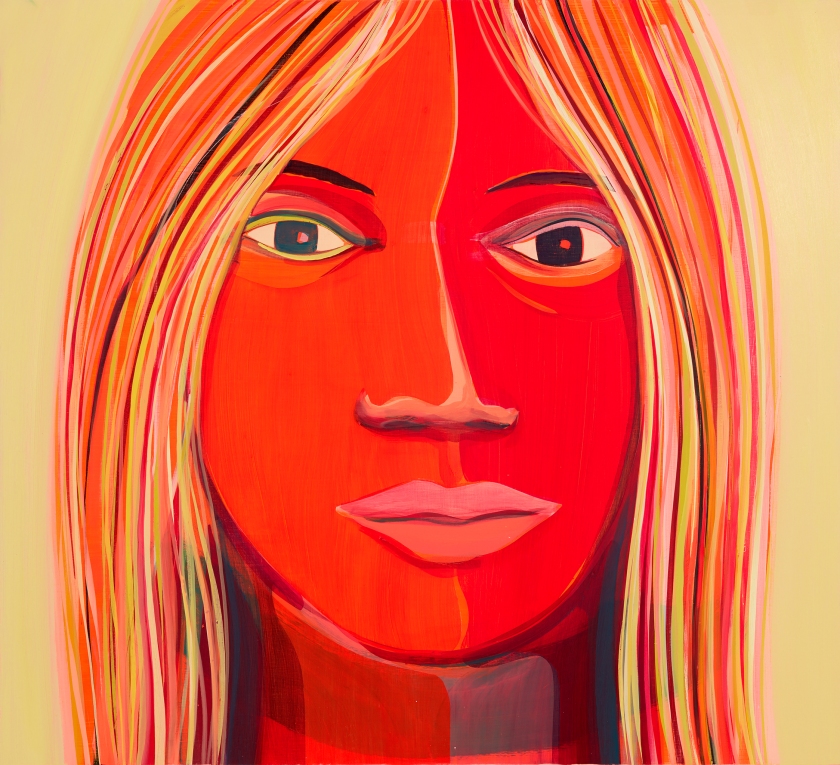 When Donald Fagen and Walter Becker, the musicians behind Steely Dan, moved out to LA from the east coast in 1971, they found the visual equivalent of their slick and expansive music in the heat haze and palm-lined avenues of the Pacific metropolis. Or is it more likely that their music started to open up in response to the grand, languid and unwalkable vistas of the west coast?  Landscapes can engender complex responses; mythologies, iconography and aesthetics which, more often than not, leave the real thing struggling to fulfil expectations. The various mythologies of the American West, being among the most ubiquitous in modern culture, also make it difficult to view almost any artwork which takes them as its subject with fresh eyes, such is the power of the iconography which has already accumulated around the subject.

In each of the paintings in Jules de Balincourt’s current show at Victoria Miro, ‘Stumbling Pioneers’, we encounter many of the visual triggers we might expect on the subject: empty swimming pools, a truck stop, a molten sunset, a freeway winding through the edgelands of the city. It is almost surprising to see each motif dealt with so concisely in individual panels. The initial impression is of an outsider’s perspective; an attempt to document the city and its surroundings in a series of illustrative vignettes, executed by someone who is seeing them for the first time perhaps. De Balincourt is in fact painting these works after a period of 20 years spent outside LA. So after such a long absence one could be forgiven for feeling, at least partly, like an outsider. 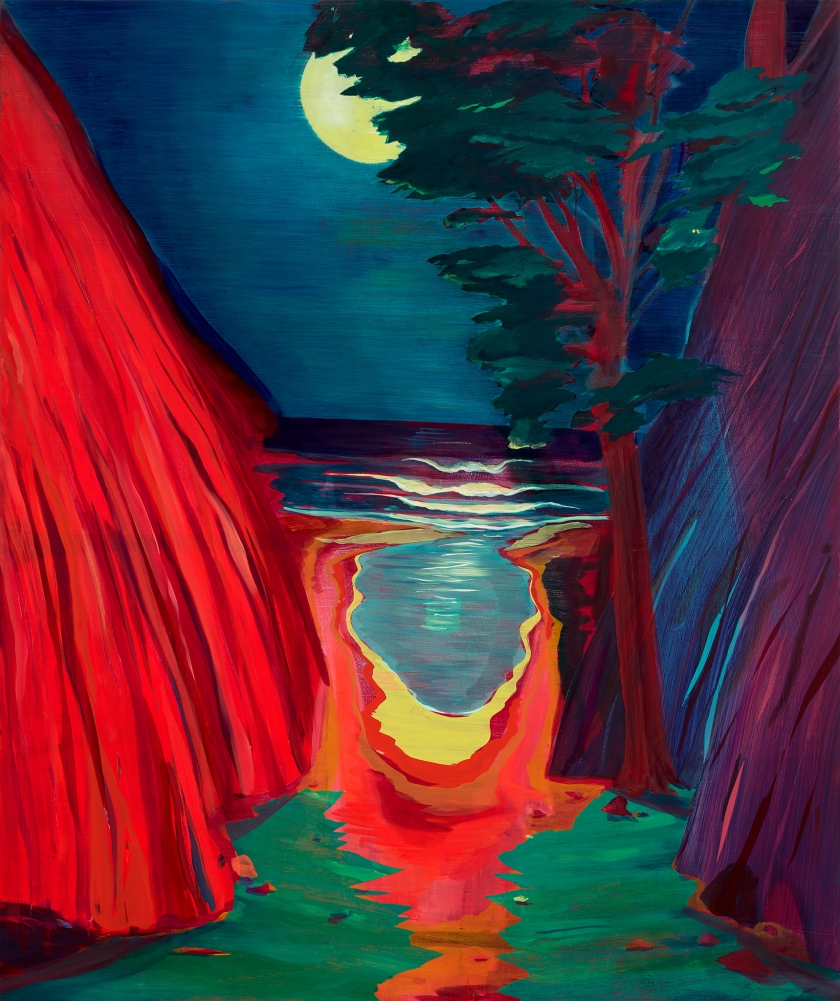 The works are of various dimensions, painted on wooden panels which float about an inch or so off the wall on recessed wooden supports. The hidden supports are each treated with the predominant colour of the image itself. Some of these colours are almost fluorescent, and the effect from a distance is of a subtle coloured backlight to each panel. Most of them are painted in oil, but some use both oil and acrylic. The application of these two very different types of paint on the same panel is executed so well as to make them almost indistinguishable.

In fact, it is in the paintwork itself, more than the subject matter, where these works reveal their true depth. De Balincourt’s work over the past decade has tended more towards the graphic and illustrative than the painterly. In ‘Stumbling Pioneers’ however, there is a consistency of treatment across the series which seems to come from the very finely balanced conjunction of painterly and narrative elements. There are tiny details in many of the panels: isolated figures, crowds, vehicles, buildings and foliage, all of which could threaten to undermine and trivialise the more profitable articulation of the painted surface as a whole. But de Balincourt resists the impulse towards full-blown illustration. In painterly terms his protagonists owe more to Pissarro’s strolling promeneurs in the Jardin de Tuileries than to Lowry’s overwrought stick figures. After all, why go to the trouble of crafting such beautiful panels only to forfeit the lessons of painting to the cheap visual delights of illustration?

De Balincourt’s method is most evident in some of the larger panels. He speaks of ‘a very intuitive dance in the dark of brushes and pigments’, and this painterly intuition results in the more abstract, gestural expanses of paint we see in works such as ‘Spirit Mountain’, ‘Tree Portal’, ‘Night Moves’ and ‘California Native’. It is also evident in many of the smaller works, where the initial gestural applications of pigment act as a kind of trompe l’oeil support for more explicitly illustrative details. A very evident awareness of medium, and its limitations and potential is also translated effectively by the artist to the small scale panels. Inspecting the details closely we can see that, just as Pissarro’s figures disintegrate as we get closer, their implied limbs relinquishing their power to suggest human form, de Balincourt’s figures also fracture and return to the condition of mere brushwork. Layers are built up to great effect by masking off parts of the original underpainting to allow for successive gestures to accumulate. Some of the more abstract areas are blocked in with irresistibly lush paintwork. The motifs which occupy the edges of ‘Slab City’ are indicated with a uniform cross-hatched pattern of brushwork. The treatment of the surface of the large portrait ‘California Native’ draws us into such close examination that we get lost in its abstract intimacy. 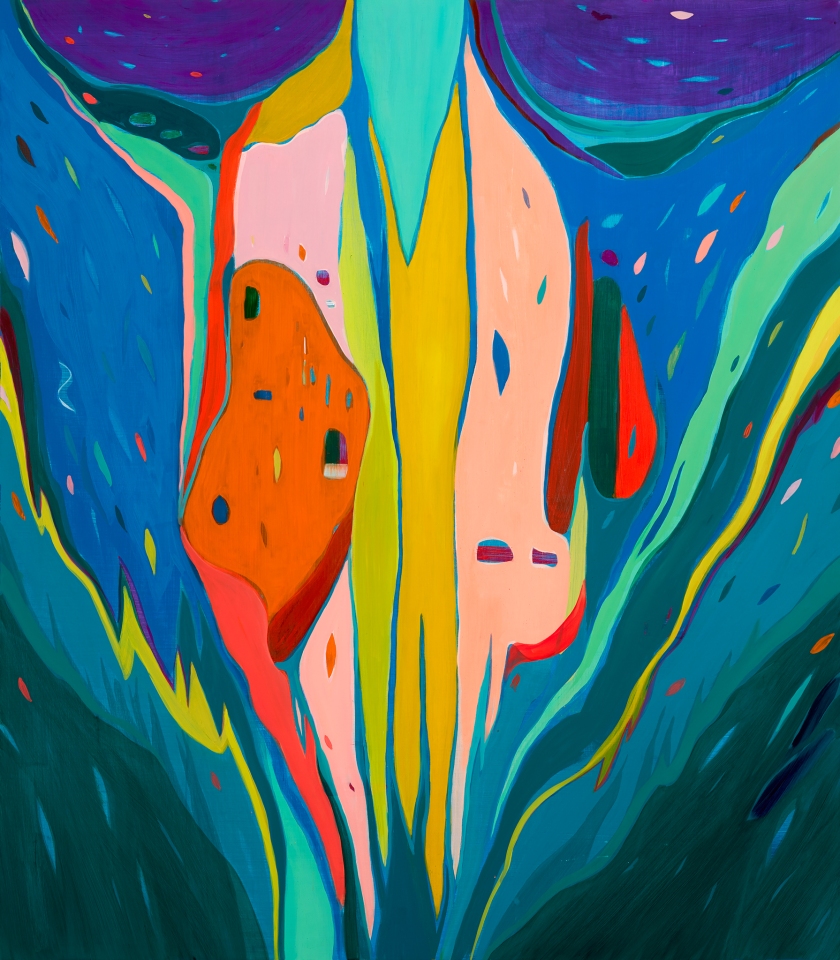 There is so much visual thrill in each panel that it is easy to overlook the descriptive elements; the sunbaked melancholy of a littered and dried up pool, the monochrome effect of a Pacific sunset intensified perhaps by a toxic haze of pollution from the city, or a procession of figures rendered miniscule by the surrounding forest. We take this imagery for granted because we feel we know it already, if not first-hand then through an infinity of second-hand sources. The fact that the glamour of the new frontier might mask a set of banalities comes as no surprise. De Balincourt does not press any of the narratives too heavily in this current series. Instead there is a tidy balance between the people in these paintings and their surroundings. The message from these landscapes is not apocalyptic but rather one in which the environment of the American West, whether man-made or natural, continues to surprise with its complicated beauty.