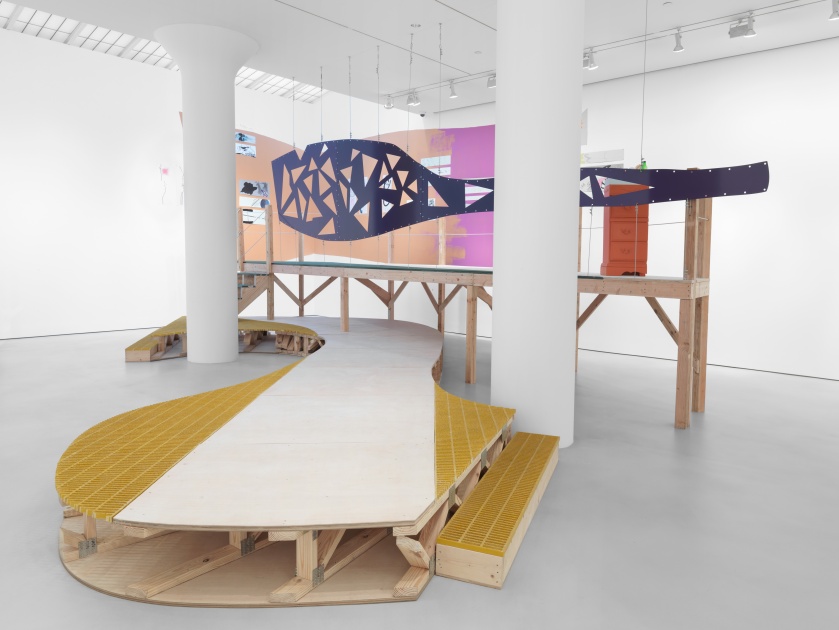 When certain critics asked Jackson Pollock why his paintings stopped short of the edges of the canvas, as though the looping paintwork was turning back on itself, they were exposing a fictional boundary between painting and the world beyond the canvas. In asking the question they seemed to be willing the paint across the edge, perhaps to see what would happen and what it would mean.

When I first saw Jessica Stockholder’s work about 20 years ago, reproduced in a generously illustrated large format Phaidon monograph, I realised what it meant to take the challenges faced by painters every day in front of their canvases and to thrash them out in three dimensions. The issues of painting are portable I discovered, and could just as well be investigated without easel or paintbrush.

Using the most commonplace of items such as plastic laundry baskets, refrigerator doors, lightbulbs, fans, mirrors, and shower curtains, Jessica Stockholder creates irresistibly lush environments. Where she uses paint, it is to consolidate disparate objects under the same colour. In other places similarly coloured, unpainted objects seem to mimic the painted surface. Her immersive installations, sometimes resembling a latter day merzbau, are cerebral and poetic in equal measure.

JESSICA STOCKHOLDER / THE GUESTS ALL CROWDED INTO THE DINING ROOM
is at Mitchell-Innes & Nash, New York until October 1, 2016.
www.miandn.com