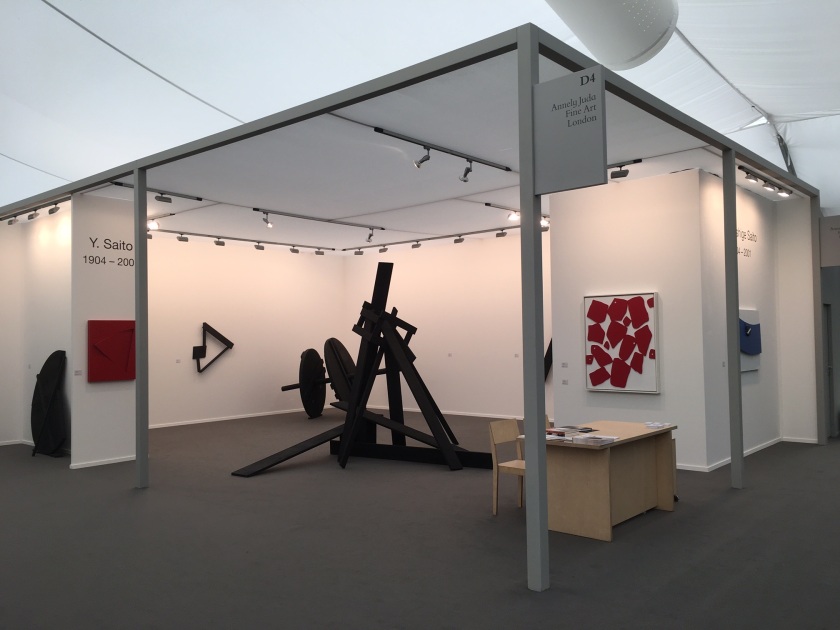 Installation view of Annely Juda’s presentation of Yoshishige Saito at Frieze Masters 2016. Image courtesy of Annely Juda Fine Art.
Back at Frieze Masters there were yet more fascinating finds to be made. In what was another example of a well-presented mini survey, Annely Juda Fine Art was showing work exclusively by the Japanese sculptor Yoshishige Saito (1904 – 2001). Saito had a significant influence on a later generation of Japanese artists including Lee Ufan, Katsuro Yoshida, and Nobuo Sekine; artists who went on to develop what became known as the Mono-ha movement. Yoshishige Saito’s work however, is often seen as a bridge between European modernism and Russian Constructivism in particular, and the more conceptual art which developed in Japan in the 1970s. After most of Saito’s body of work had been destroyed in the Second World War, the artist began to create larger sculptural installations. After winning the prestigious New Artist’s Prize in Japan, Saito received international exposure at both the Venice and Sao Paulo biennales. 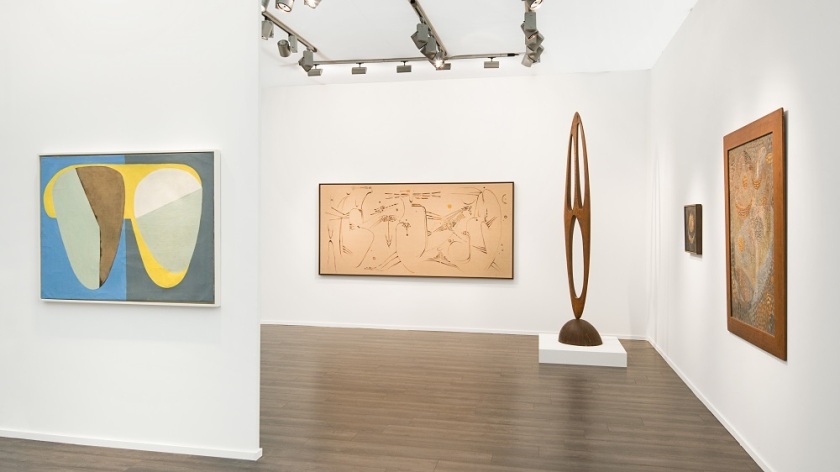 Installation View, Wolfgang Paalen and Abstract Spiritualism, Gallery Wendi Norris, Frieze Masters 2016, Photographer: Charlie Littlewood. Image courtesy of Gallery Wendi Norris, San Francisco
There is hardly enough room here to even summarise the career of the Surrealist painter Wolfgang Paalen (1905 – 1959), whose trajectory took him from a wealthy family background in Austria during the decline of the Austro-Hungarian empire to self-imposed exile and suicide in Mexico via the Abstraction-Création group and the Surrealists in Paris in the 1930s. His painting ‘Le Grain de Sable’, visible in the centre of the installation view above at Gallery Wendi Norris, is an understated work painted directly onto raw silk. There is not the slightest hesitation or doubt in any of the spare brushwork, which has passed surprisingly little of its oily residue through to the surface of the material over time.
Back at Frieze Art Fair for a last circuit of the booths to spot some more interesting contemporary painting. Marina Adams (right hand side of the installation view below) is showing a couple of large canvases at Salon 94 which demand a closer look despite their apparent immediacy and high-volume colour arrangements. They teeter on the edge of pure visual pleasure but the colour constructions are expertly disjointed and as a consequence, difficult to pin down. Look at one of these paintings for a few minutes and then try to remember the precise arrangements of colour and shape. 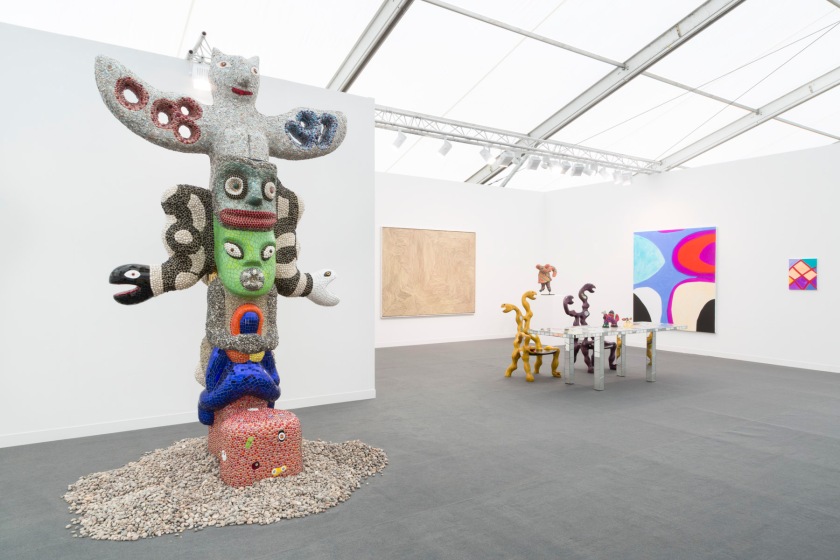 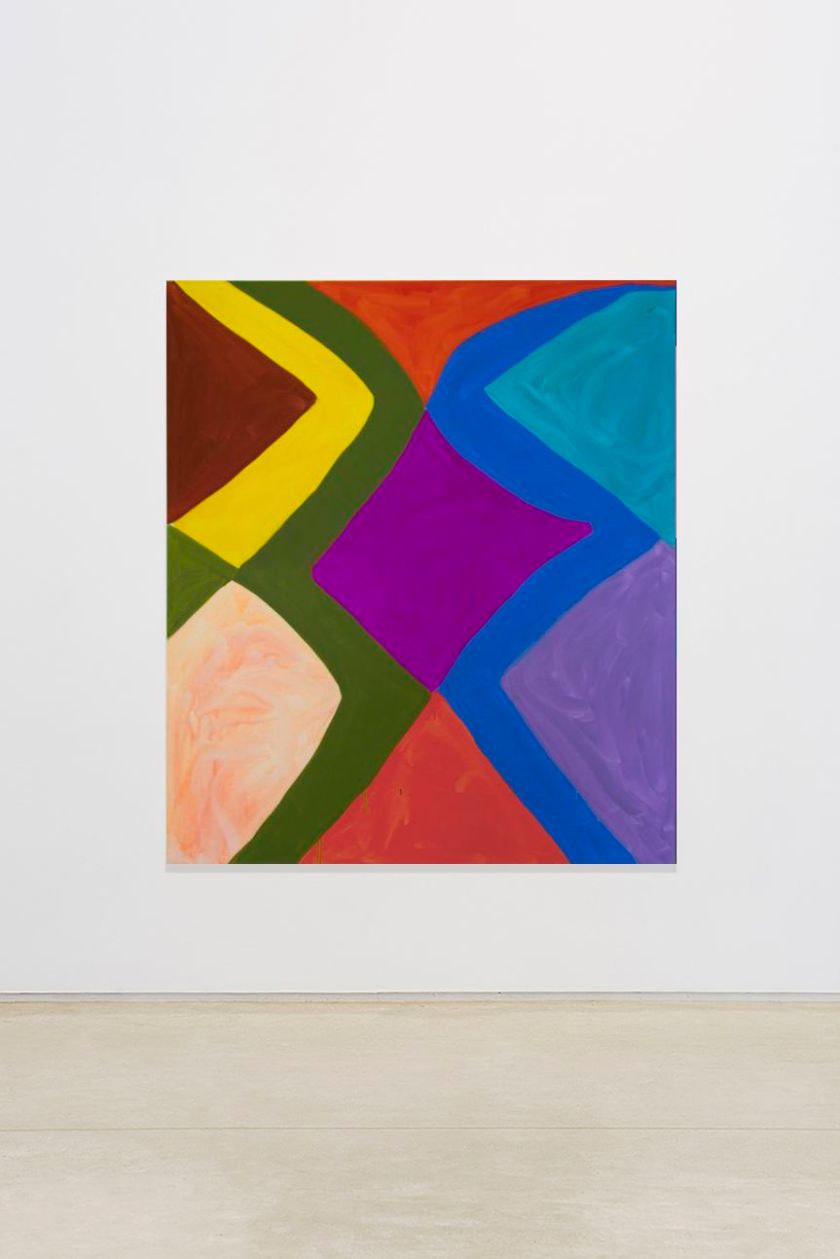 One final selection which received a lot of attention was a cluster of sand portraits by Peter Böhnisch at CFA Berlin; more visual pleasure and plenty of speculation from visitors about the technique the artist used to create these gravity defying sand paintings. 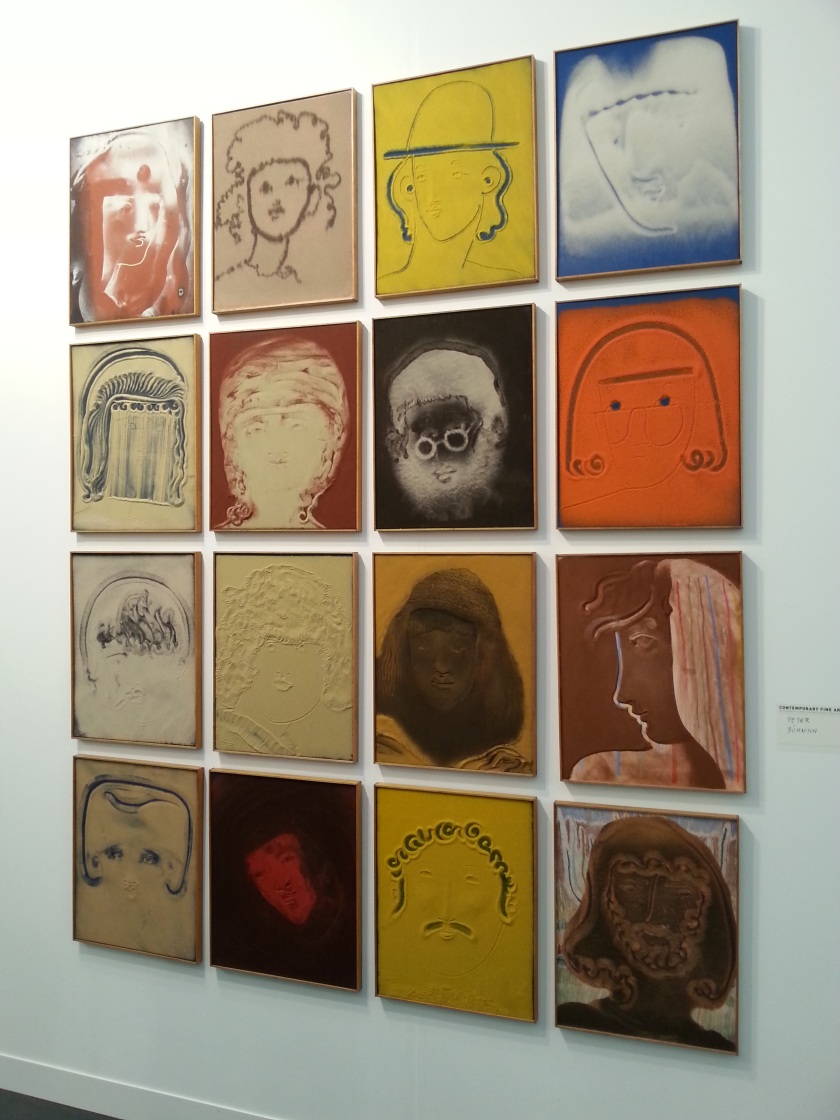 Installation view of Peter Böhnisch at CFA Berlin, Frieze Art Fair 2016. Image taken by the author with kind permission of the gallery.

As Frieze 2016 has come to an end, I will be returning to coverage of London shows over the next few weeks including Abstract Expressionism at the Royal Academy, Picasso Portraits at the National Portrait Gallery, The Turner Prize and Robert Rauschenberg, both at Tate.

If you would like to receive email updates from theglazelondon, fill in and submit the form below.