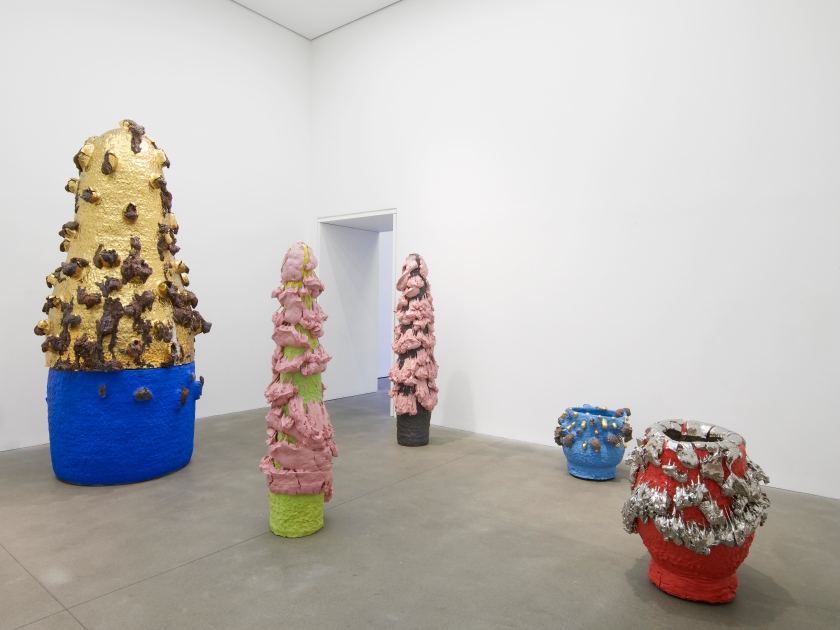 A “disturbing, frozen organicism” is one of the qualities Briony Fer attributed to the ceramics of Lucio Fontana, especially those he produced from around the late 1940s onwards. Fer, writing in the November 2014 Artforum, spoke of Fontanas’ ceramics as “…a riff on the dissolution of proper form…”, and took as the cue for her interpretation of this work, the concept of the Formless (L’Informe). The idea of L’Informe, developed through the 1996 exhibition (and book of the same title, at the Centre Georges Pompidou, curated by Yves-Alain Bois and Rosalind E. Krauss) held a sub-category which the authors termed base materialism. The characteristic of base materialism could be seen, it was argued, as one of “…de-classing matter, of extracting it from the clutches of classical materialism,..”

The kind of work the authors had in mind, and which Fer offers by way of example in the form of Fontanas’ ceramics, could be seen as the polar opposite of almost anything which had been sculpted or crafted with an ideal form in mind. “The formless matter that base materialism claims for itself resembles nothing” (Bois / Krauss), whereas the crafted object resembles everything and anything which the artist might hold up, and to which the viewer might look up, as the embodiment or representation of idealism.

Of course Fontanas’ ceramics were crafted, and highly crafted at that. What the authors of L’Informe identified was a strand running through modern art of wilful base materialism; a tendency towards making work which looks formless, lumpen, difficult to take in visually, and almost impossible to imagine on a pedestal. That this kind of work should also look organic should come as no surprise. Nature spews, defecates and produces all manner of forms, some of which subsequently transform into something which we might designate as acceptable, ideal even.

Whilst not quite constituting a movement, the kind of artwork which could be categorised as formless is commonplace nowadays, often constituting one strand of an artist’s practice. The use of traditionally craft media such as ceramics is also routine, with some artists devoting their entire careers to working methods which were once seen as artisanal. Of course the old artistic hierarchies persist. The success of a medium such as ceramics in a gallery depends on either a lifelong dedication to the medium, or on an artist skilfully utilising it in the service of their overall vision, a relationship for which the material will have relinquished its once utilitarian function.

Takuro Kuwata may not have the concept of formless in mind specifically when he produces his sometimes gargantuan ceramics. The term organic however, with the emphasis on the more amorphous, globular forms which might result from some natural event such as a volcanic discharge as opposed to the symmetry of a leaf, certainly does apply here. In this way these pieces are formless. The techniques used by the artist produce a form of course, but one which is difficult to grasp and which is also suggestive of base physicality. The principle element of these ceramics, the bulk of each individual piece, is produced using a Japanese technique called ishi-haze, traditionally intended for making tea ceramics, small cups and bowls. In ishi-haze stones gathered from the mountainous terrain of Kuwata’s home town of Toki City are allowed to overheat in a kiln to the point where they rupture. Kuwata however, uses oversized stones to distort his forms as they melt or explode. The cracked surface of these forms is achieved by employing another Japanese technique called Kairagi, which fractures the glaze and forces it to the point where it threatens to fall away completely from the surface, sometimes peeling away in impressive nodules. The high shine of the glaze, which is applied liberally but never forms a full coating on the primary form, gives each piece a troubling aliveness, as though they were still in the process of growing, unpredictably. Of course this organicism is ‘frozen’ in just the same way that Briony Fer observed of that of Fontana.

The gift of ceramics as a medium is in its power to evoke and invoke not just the organic, but that aspect of the organic which resonates most powerfully with our awareness of our own physicality. The fascination with the apparently formless objects which nature routinely produces and for which ceramics is supremely suited to represent, is a fascination with that which is both other and somehow intimately connected to us. Our impulse to apprehend amorphous, organic form is perhaps equal but not necessarily opposite to our tendency to also fashion objects in other, more idealised forms.

Portrait of the artist in his studio, 2016

Takuro Kuwata is at Alison Jacques Gallery until November 5, 2016.