A lot is made of the theatricality of the act in the term action painters. And indeed Harold Rosenberg’s reading of what was happening to post-war American painting, as typified by the statement above, emphasises the existential encounter of the artist with the modern world, and the individual as a protagonist within a dramatic event. It is an interpretation which might seem to encourage a one-way reading of the Abstract Expressionism movement, starting with a moment of schism and considering only what came after to be of relevance. Abstract Expressionist artists, alternately referred to as Action Painters, are sometimes portrayed as fugitives from the past, as though they had performed a jail break and were now desperate to erase their past. Whilst American painting from the 1950s on did perform radical reappraisals of traditions and produce breathless innovations in artists’ media, in the scale and delivery of the painted mark, and in content, it did so with profound awareness of what had come before.

There are several characteristics of some Abstract Expressionist painting that have become synonymous with the movement as a whole. Some of these characteristics, in no particular order, are: large scale of both the canvas and the painted mark, an all-overness to the distribution of the marks on the canvas, and -in part due to the tendency of an ‘all-over’ treatment of the surface to preclude the accumulation of marks in one area of the canvas- the absolute absence of anything which could be thought of as representational. The fact is that these characteristics are not to be found systematically throughout Abstract Expressionism, and in many cases they are nowhere to be seen.

There was certainly a shift towards large scale canvases from the 1950s onward. Not everyone however worked on such a large scale, at least not all the time. Jackson Pollock’s experience of working under the Mexican muralist David Siqueiros at his Union Square workshop may have informed the artist’s eventual jump in scale. His move out of the city to a larger barn space in rural East Hampton also afforded Pollock the freedom to work as large as he could imagine at the time. On balance though, many of Pollock’s canvasses are surprisingly small. Not everyone super-sized their act. The artist Richard Prince beautifully sums up the quiet intellect and discipline of Willem De Kooning’s canvases when he describes him as “…the guy who spread his arms and said that’s all the space I need…” (Richard Prince – Artforum summer 2011) 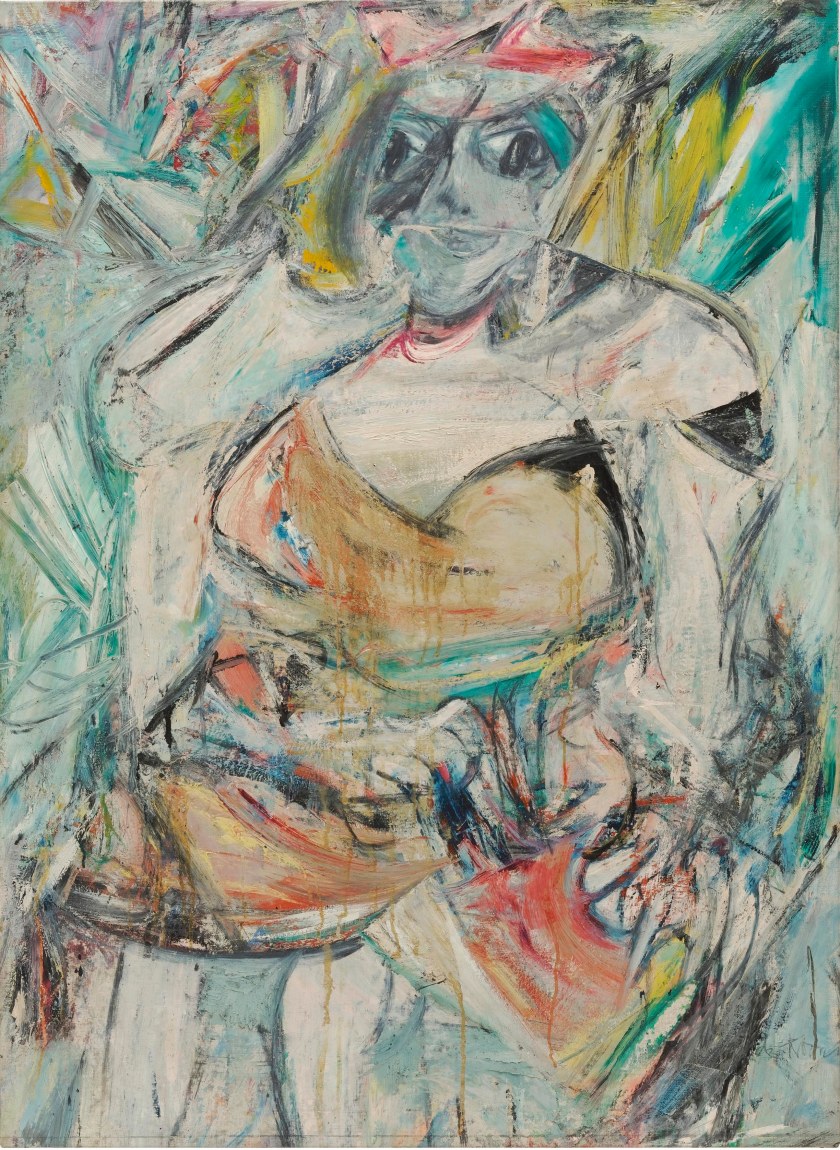 As for markmaking, there was undoubtedly a level of innovation in how artists actually got the paint from the tube or the tub to the canvas; innovations which have continued to inspire painters since. Pollock again, with his substitution of brush for stick dipped in enamel paint, has come to represent an anarchic rupture with the past. This is an interpretation which has served to limit the reading of AbEx to one of a movement which disavowed all that had come before. The origin of Pollock’s trademark gesture probably lies again in the artist’s experience of splashing paint about for the energetic Siqueiros. What is not evident until one is standing in front of the Pollocks gathered together for Abstract Expressionism at the Royal Academy is the quiet care the artist put into his marks. Every inch of the surface is considered and equally weighted, and the only evidence of anything random and uncontrolled is the dispersion of the edges of the viscous paint marks after they have hit the surface. Pollock was very much engaged with recent developments in European art. He saw the movement of major figures of European modernism to America as “…very important, for (the fact that) they bring with them an understanding of the problems of modern painting.” Of the two artists he admired most, Picasso and Miró, Pollock professed to be “…particularly impressed with their concept of the source of art being the unconscious.” (Jackson Pollock quoted in ‘Jackson Pollock / Energy Made Visible’ by B. H. Friedman, Da Capo Press 1995) 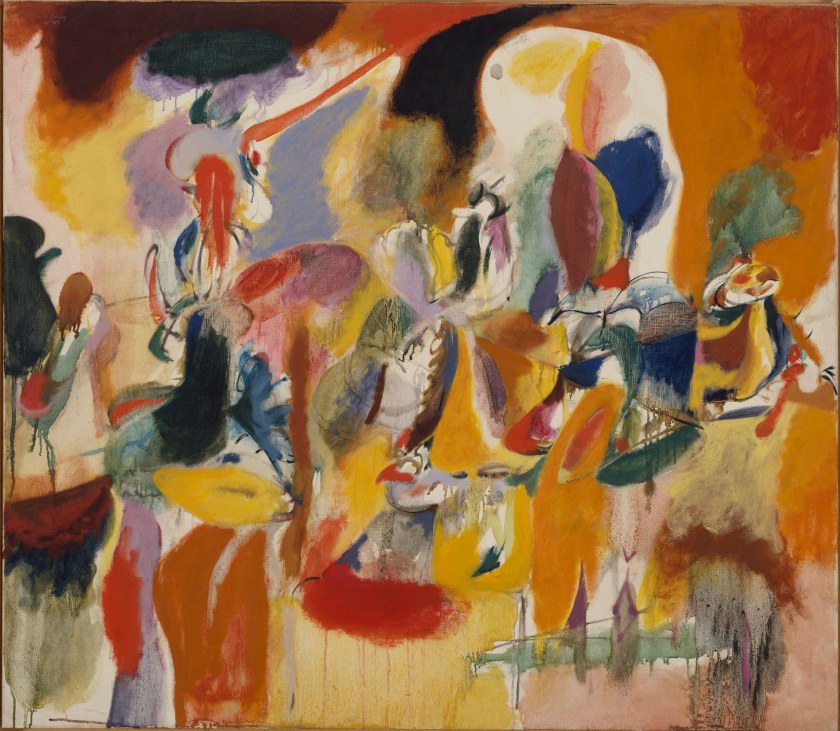 The all-overness which is sometimes thought of as a prerequisite for truly AbEx painting is also something which is not apparent in many of the artists in this survey show at the Royal Academy. Whilst De Kooning did super-size his brush work, his thick shafts of colour coalesce to form figures and landscapes. The debt to figuration, or perhaps better termed representation -since even an abstract mark forms a figure of a sort on the canvas- is one that is common to all of the artists under the heading AbEx. The painter Robert Motherwell spoke of “…the anti-intellectualism of English and American artists…” (Robert Motherwell ‘The Modern Painter’s World’ – lecture delivered at Mount Holyoke College, Massachusetts, August 1944) and it fits a crude reading to suggest that the arrival of AbEx signalled a reconciliation of a Euro-centric tradition of intellectualism with a more Anglo-Saxon suspicion of that which appears opaque or obscure. This sense of a certain moment involving an encounter between the old and new world, and a subsequent dramatic rupture, does not sit comfortably with the nuanced and sometimes contradictory evidence of influences and interests which form the biographies of each individual AbEx artist. John Elderfield (Chief Curator of Painting and Sculpture at the Museum of Modern Art from 2003 to 2008) suggests that “The idea of fitting into some historical inevitability was a great force behind what (Barnett) Newman and (Mark) Rothko and Pollock did. They saw themselves as gathering momentum from the past and really pushing forward.”  (John Elderfield speaking about Willem De Kooning in Artforum summer 2011)

The narrative of Abstract Expressionism as a movement which was solely forward-looking is an inaccurate one. As Elderfield states, there was a continuity between the past and the then present moment in which these artists found themselves. Without momentum the movement would have foundered. It is no coincidence that one of the artists in the current Royal Academy show who had the most developed connection with European modernism, Hans Hofmann, was also one of the most influential teachers of painting of the 1950s and 60s in America. (Having emigrated from Germany to the US in the 1930s,  Hofmann went on to influence the development of a generation of American painters, including Lee Krasner.)