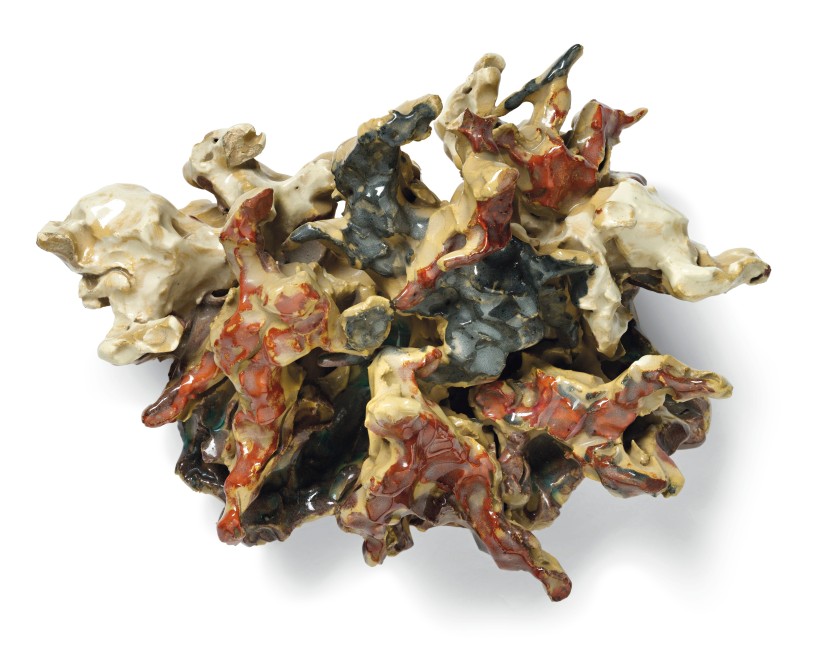 To ponder the question of whether Lucio Fontana was primarily a painter, a sculptor or a ceramicist might have seemed to the artist himself to be beside the point. His was an art in which concepts and gestures were of far greater importance than the medium through which they were articulated. Perhaps for this reason, Lucio Fontana adopted different media with ease, and jumped back and forth between them without missing a beat throughout his career – making it tricky to map the artist’s work into neat stages.

Fontana may nowadays most commonly be thought of as a painter – of sorts; the one who punctured his canvases with holes (Buchi) and slashes (Tagli). However, Fontana’s oeuvre was immensely varied. From his initial artistic training in Italy he focused on sculpture, returning to Argentina to work in his father’s studio in the early 20s, following a period of study at the Fine Arts Academy in Milan. In the mid-1920s he produced his first ceramics, and continued to work in that medium at various stages throughout his life, all the while executing sculptural commissions, creating immersive installations, and producing series of paintings.

Fontana saw any attempt to push the possibilities of a medium such as paint, clay, or marble as an effort in the wrong direction. To spend one’s career finicking over the arrangement of the painted surface, no matter how revolutionary it might seem was for Fontana, to miss a greater opportunity. As Yve-Alain Bois has noted; “…testing the respective limits of sculpture and painting…was the least of Fontana’s concerns.” (1.) In the 1950s, Fontana was of the opinion that Jackson Pollock was too tied to his investigations into the painted surface, and had really wanted, but failed, to go beyond. What Fontana had in mind was the space beyond the surface of the canvas, in front of and behind the two-dimensional surface; everything which was not in fact the object itself.

Fontana’s dismissal of medium does not imply irreverence towards it – (He was a highly accomplished sculptor, and had spent years in Italy producing public sculptural works in a triumphalist idiom). Neither was it his desire to upturn artistic convention – (not even those forms such as Cubism, which were themselves becoming conventional). Fontana’s dismissal of medium came from a perceived redundancy. “We are living in a mechanical age, in which plaster and paint on canvas are no longer meaningful.” (2.) He was a close observer of the technological developments of the twentieth century, especially developments in quantum mechanics and space travel. 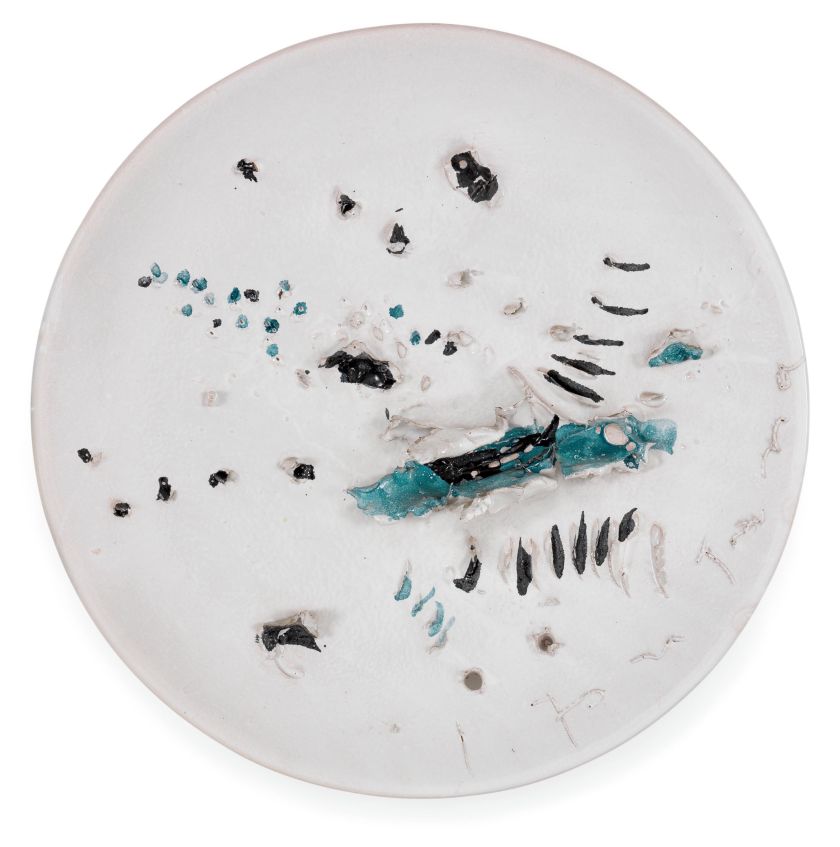 Fontana’s distaste for the practice of foregrounding the medium and its attributes and possibilities – a kind of artistic navel-gazing – also meant that the artist had a surprisingly liberal attitude to the idea of decoration. For him, once an idea had been arrived at and was ready for execution in canvas or clay, any formal choices such as colour and shape could be made as easily as choosing a swatch of fabric. “All the rest, the various colours, the arrangement of the slashes or the holes are variations for the public.” (3.) It is an aspect of Fontana’s art which has been taken up as kitsch by some, and which doubtless has added to the popular image of the artist’s work in painting as slick, and a precursor to Pop Art. Fontana’s slashed and punctured canvases, whilst they were often sharp and sometimes gaudily coloured, were not intended to act on a decorative level alone. The decorative could be taken care of in a single decision – by covering the canvas in bright pink for example. The intellectual weight of the work, for Fontana, rested on a single gesture, which was very effectively emphasised by colour. “My discovery, it’s the hole…that’s all; it would be all the same to me if I had died after this discovery.” (4.)

As much as Fontana could deploy decorative flourishes to counterpoint the intellectual heft of his canvases, he engaged in the traditionally craft medium of ceramics with the categoric refusal to produce anything functional, stating “I have never made a plate…and I have never painted a vase.” (5.) Looking at the range of ceramic pieces on show at M&L Fine Art, this anti-utilitarian brief is evident. The work spans two decades, from the semi-abstract formlessness of Battaglia from 1947 to the rich, machine-produced slickness of Concetto Spaziale from 1967. The most interesting pieces in this show are arguably those in which we can see evidence of the artist’s physical manipulation of the medium. Fontana’s signature works may rest in the memory on those singular gestures of the cut (Tagli) or the hole (Buchi); gestures which the artist intended as self-contained concepts beyond both time and space, and beyond the limiting terrestrial concerns of the medium and its base processes. But there is no doubting the sensual reward from looking at these beaten and complex ceramics with their lightning dashes of glaze and motif. 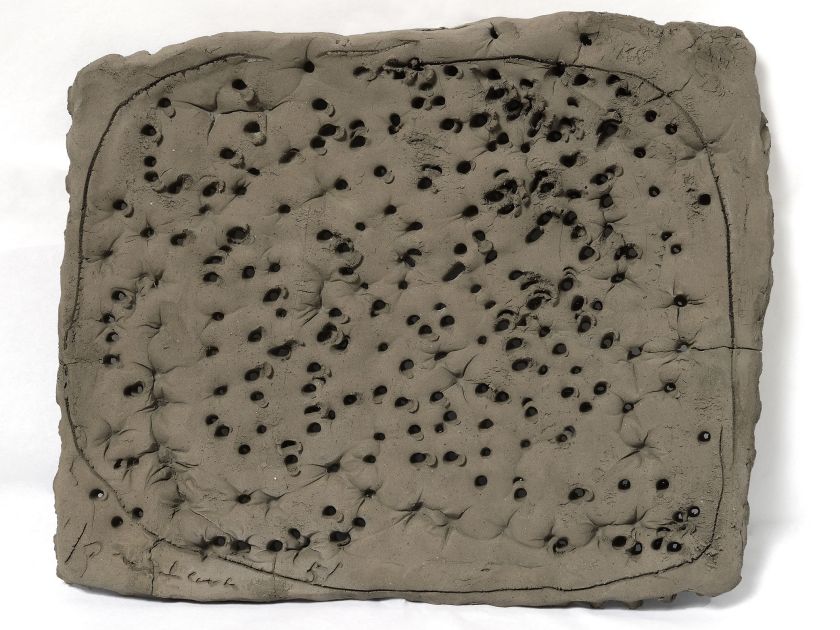 It is impossible that Fontana was indifferent to the effects of the medium of clay in all its variety. Some of the pieces on show are highly worked and dripping in luminous glaze, while others, such as Concetto Spaziale il pane from 1951 are untreated and sullen – an appropriate treatment which allows the puncture holes to retain their immediacy. In these ceramics we see concentrations of the various contradictory aesthetics that Fontana employed with ease in his larger oeuvre. We can also see, in some of these works, signs of Fontana’s interest in the baroque. Fontana was drawn to the baroque for its grandeur, both spatial and decorative. It appealed to his concept of spatialism for the reason that “The figures appeared to leap out of the flat surface.” (6.) In fact, it should not seem unreasonable for someone who looked so much to the future of science and technology also to be propelled by a keen sense of the past. Fontana had also, from the earliest stages of his career, sought to raise his work above both functionality and the material demands of the medium. It seems natural that he should be drawn to such an aristocratic form as the baroque with all its gilded ebullience. And it is this aristocratic strain that Fontana saw in the medium of ceramics, and which, for him, raised it above the level of craft. In his art Fontana always announced what Briony Fer has termed his futurity through the lens of the past.