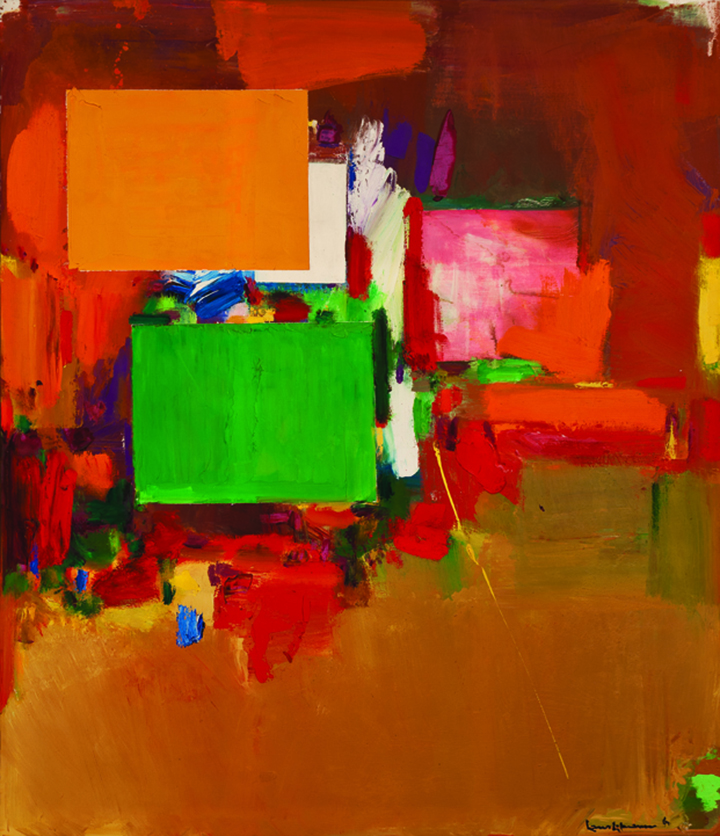 “Art is always spiritual”. It was with such unequivocal statements as this that Hans Hofmann (1880 – 1966) established his reputation as a highly effective pedagogue, a motivator of artistic talent, and a convincing champion of European modernism. From the moment he relocated to the United States from Munich in 1932, he set about the task of instructing a new generation of American artists. His teaching was characterised by a generous self-confidence, and supported by a comprehensive set of clear principles centred on the act of painting, colour theory, and the purpose and limits of the painted form.

Throughout the 1940s and 50s Hofmann’s methodology would continue to inspire his students and emerging artists. His message however, representing as it did a Euro-centric devotion to the figure and the picture plane, would ultimately provide some of his students, such as Lee Krasner, with something against which to rebel.

Looking at Hofmanns’ paintings today, it is impossible to feel the same investment in the battles of theory which were fought across the lines of European Modernism and the emergent force of Abstract Expressionism. Nevertheless, Hofmann’s late work in particular, looks fresh and complex today, and continues to provide invaluable lessons to artists. 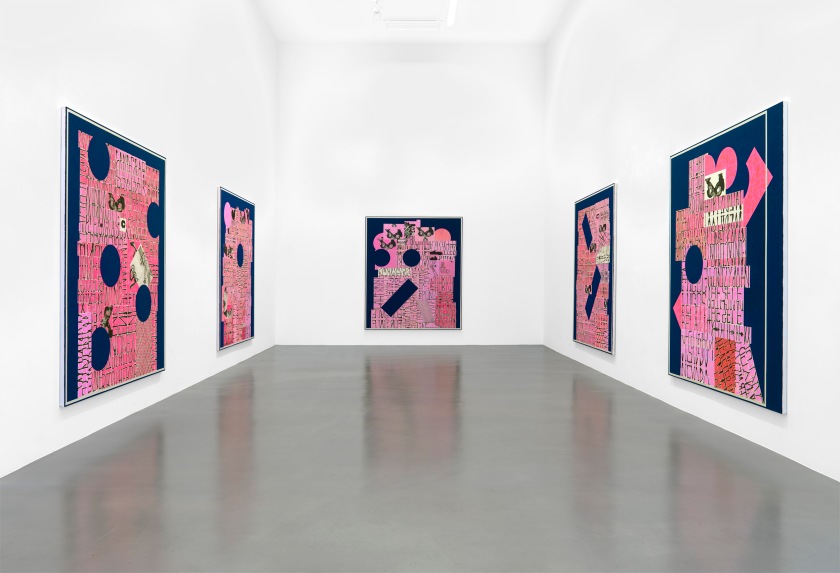 To read the critic Clement Greenberg writing in 1948 that “…the cubist tradition may enjoy a new efflorescence in this country (America)…” is to be reminded that American art was, until well into the 20th century, still looking over its shoulder at Europe. This ‘efflorescence’ never did occur, unless Greenberg had in mind some kind of sublimated re-presentation of cubism, on a larger scale perhaps – a scale befitting the art of an emergent superpower.

David Korty (born, California, 1971) is painting at a vast remove from a time when the futures of clearly identifiable movements in art were the subjects of earnest debate. If the current series of paintings on show at Sadie Coles employs visual devices familiar to us from the work of a range of cubist and post-cubist artists from the past, then it presents these devices in a way which has been researched. His work is cool, in the sense that it does not break a sweat or leave itself exposed to anything so compromising as spontaneity. Accidents, happy or unwanted, have likely happened during the period leading up to the commencement of the series proper, before the major choices involving colour, text, scale, and motifs had been made. The resulting work is sharp, consistent, and imposing. END_OF_DOCUMENT_TOKEN_TO_BE_REPLACED

Lee Krasner would try to forestall criticism when, looking back on an early painting trip to Provincetown with Jackson Pollock, in which the two artists hardly put brush to canvas, she insisted that “…to the people who think paintings are made only at the moment paint goes on canvas!” the trip “…was productive”.

For Krasner painting was always the central activity of her life. Even when out walking the flats of Provincetown she was reflecting on her work. It was her period of study under the painter Hans Hofmann in the late 30s which would force Krasner’s work into maturity and help her find her own voice. She had easily assimilated the lessons of Cubism as they had been interpreted and developed by Hofmann. But Hofmann would always have one foot in Europe and so would never consider, and perhaps never want to take the dramatic leap into complete, all-over abstraction.

Krasner felt no such allegiance to the practice of pushing shapes around the canvas. From her mid-career work on there were no ‘gaping holes’ the likes of which Clement Greenberg deplored. There were no objects for the eye to rest on and the painting itself had become the subject.

Lee Krasner’s work will be on display from September 24th 2016 as part of the exhibition Abstract Expressionism at The Royal Academy.

Abstract Expressionism at The Royal Academy

Despite what might be going on behind the scenes, to the gallery-going public August in London means down-time on the gallery circuit. Many quality, big name galleries fill this gap with group shows which, to the regular visitor, can seem like the weakest link in an otherwise strong calendar of exhibitions. For smaller galleries looking to build an audience however, it’s as good a time as any to offer an overview of the artists they represent.

The group show, ‘Le Penseur’ at Jack Bell Gallery, a bright and tidy space behind White Cube in Masons Yard, provides a neat introduction to some of the Gallery’s stable of artists. The space is a nice surprise at the top of an unexotic flight of stairs in one of the narrow townhouses on the square. It contrasts modestly with the colossal cavity block that is the White Cube. Indeed, this whole area, according to the new Mayfair & St James’s Gallery Map, which shows what I estimate at 150+ galleries, is a densely packed hub where old, ageing, and new spaces coexist. It’s encouraging to see surprisingly fresh work being shown in some of the smaller galleries in this area, in the middle of so much Polo and Aquascutum. END_OF_DOCUMENT_TOKEN_TO_BE_REPLACED

David Hockney / Portrait of an Artist (Pool with Two Figures) 1971 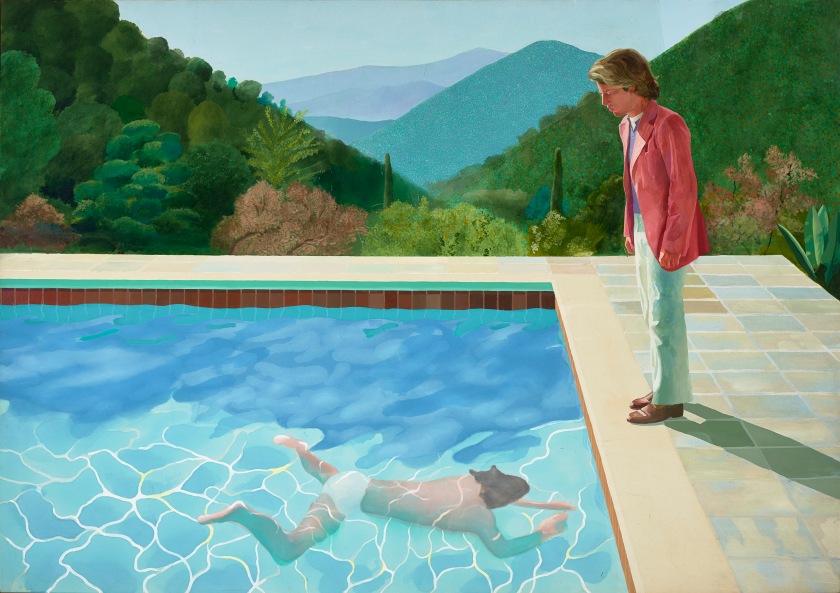 When I was in my early teens I came across David Hockneys’ interpretations of Cubism through what he called ‘joiners’; composite images composed of clusters of Polaroid photographs. The effect is similar to early Cubist portraits, where the figure has been fragmented and reassembled. At the same time Hockney was painting tightly composed portraits à la Picasso of the 1940s. With a distinctively sun drenched take on Picassos’ signature motifs, Hockney took quantum leaps across a substantial Cubist lexicon. Not only did he dip in and out of Cubism at random, but Hockney seemed to play around with it without the slightest hint of reverence. And why shouldn’t he? Picasso too, by his own admission, was an expert thief. As a consequence of the lessons I learned from Hockney’s fresh take on Cubism, I went back to my textbooks to see how badly I’d misread Picasso the first time around.

Hockney was the perfect art history teacher, and for the period that followed I rarely thought about his work without it leading to the discovery of someone else’s. I have learned to look far more carefully since then, and discovered so much more in Hockney that is original and timeless.

We might think of a painting as finished when the decision is made to stop working on it. Having over-cooked a canvas or two however, a good painter will know what it feels like not to be able to undo something and call the previous mark the last.

If Krebber’s painting can be called minimal, it is of a different order to that of say Robert Ryman, whose decision to use just one colour gives an illusion of economy. Michael Krebbers’ paintings operate in a condensed field where some marks are presented but all are possible, and where the first mark is equal to the last.

If you would like to receive an email whenever a new article appears, just add your details to the form below. 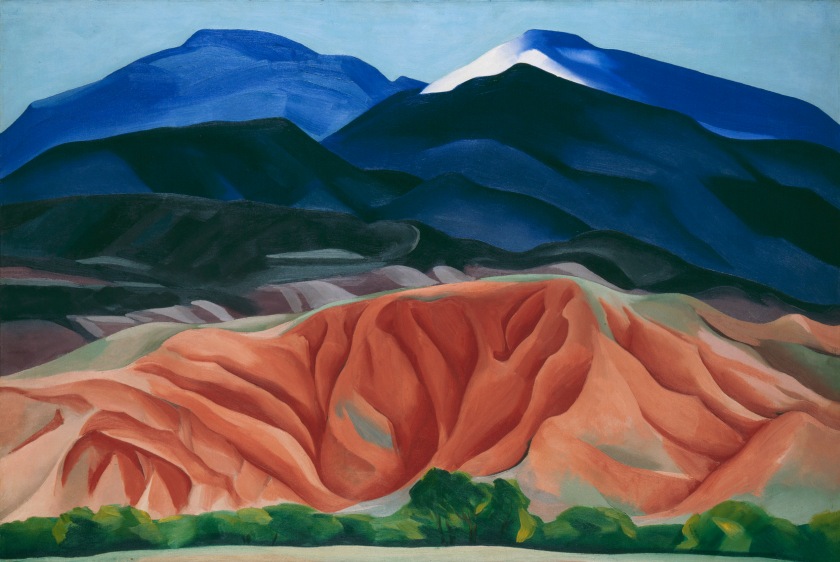 In a desert landscape, time can appear to slow to an extent which becomes difficult to measure. The sky each day can be virtually identical to that of the previous day. Evenly spaced clouds cast tidy shadows over the landscape. The result of walking to a horizon might seem equivalent to staying put. In a scenario where virtually nothing changes, neither the landscape, the climate nor the viewpoint, the only variable which the viewer, a painter perhaps, might be sensitive to is herself as she stands within the landscape. The painter Georgia O’Keeffe (1887 – 1986) was drawn to New Mexico perhaps in part because of the sun-baked permanence of the landscape. It is the kind of climate which allows an artist to spend time examining geographical features, without risk of the weather transforming the view beyond recognition. It is the same kind of permanence that drew Cezanne back repeatedly to Mont St. Victoire.

Georgia O’Keeffe liked to suggest that location was of incidental importance to her work, having written in 1976 “Where I was born and where and how I have lived is unimportant.”*. As a statement of fact however, this is amply contradicted by the majority of her paintings, which are very much products of the places in which the artist spent different stages of her life. It is more likely that O’Keeffe, through this defiant statement, was taking control of her own story in much the same way as she had learned to do as far back as the 1920s in New York.

“They make me seem like some strange unearthly sort of creature floating in the air – breathing in clouds for nourishment – when the truth is that I like beef steak – and like it rare at that.” – Georgia O’Keeffe

From the moment of her first solo exhibition at 291, the New York gallery of photographer and influential art world figure Alfred Stieglitz, O’Keeffe’s public reception was being stage managed in a way which foregrounded her status as a female artist. It was a reading of her work which the artist thought bore no relation to what she was producing; “They make me seem like some strange unearthly sort of creature floating in the air – breathing in clouds for nourishment – when the truth is that I like beef steak – and like it rare at that.”. Having met in 1916, O’Keeffe and Stieglitz formed a relationship which was both professional and to different degrees mutually developmental, and which evolved into a personal one very rapidly, with the couple ultimately marrying in 1924. In 1925 O’Keeffe and Stieglitz moved into an apartment in the 34 storey Shelton Hotel on Lexington Avenue. By this time O’Keeffe was firmly established in Stieglitz’s professional circle of what she called ‘city men’; a circle which included the photographer Paul Strand (1890 – 1976), and the painters Marsden Hartley (1877 – 1943) and John Marin (1870 – 1953). From 1925 until 1929 O’Keeffe painted a series of New York cityscapes inspired by the emerging metropolis, seen both from street level and from the windows of the couple’s apartment. These paintings are among the most solid works the artist produced in her entire career. Their slightly fractured planes, emphasised, if not created, by the steam and smoke rising from the city, speak more of the influence of male dominated European Cubism than any presumed femininity or lightness of touch. END_OF_DOCUMENT_TOKEN_TO_BE_REPLACED