Painters tend to approach the work of other painters in a matter of fact way. When they walk around a show they might go straight to the side of a canvas to scrutinize how the artist dealt with the edges, or perhaps contort themselves into unnatural positions to verify whether the surface reflects the gallery spotlights, or instead resists their potentially cheapening glare. More often than not, painters will point to the craft of a painting, how it was put together, rather than what it is trying to say or how it makes them feel. It’s a bit like the art world version of kicking the tyres at a car show.

With Tomma Abts’ work one could talk about craft, and how the paintings were produced, for longer than most people might listen, before ever getting around to subjective responses. There is so much to discuss regarding the physicality of Abts’ work, despite the fact that in reproduction it comes across as unremittingly graphic. This work has to be seen in the flesh, as it is only when the viewer is face to face with it that it truly discloses. 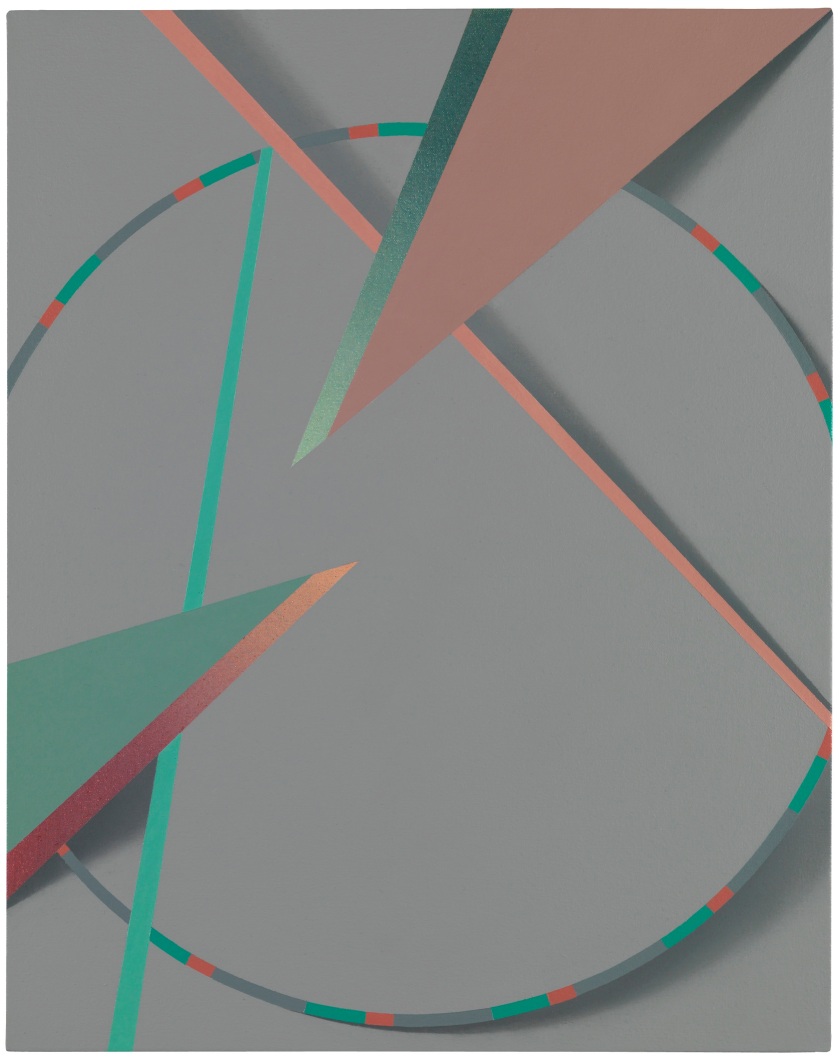 For some reason, whenever I think of Tomma Abts’ work I get the sensation that I am looking at work which is minimal. Perhaps it is the cumulative effect of so many sharp edges, and the general predominance of a single colour in more or less each painting, and the overall equivalence of tone within canvases that have several colours, that leaves the single abiding sensation of having seen something exceptionally understated. This is not the case however. There is a great amount of general activity going on in each of these paintings. Up close, there is a rawness to the masked out edges of straight lines, which betrays the handmade reality of these paintings. There is relative discord too in the colour schemes; no more so than in the piece entitled ‘Oeje’. Then there is the support itself; a slight plumpness in the folds of the canvas around the corners of the stretcher interrupts what, from a distance, looked more like a machine cut panel. This added level of physicality becomes even more apparent on such small canvases than it would on much larger ones, and might threaten to become an irksome feature in itself were it something that the artist had simply overlooked. But it is inconceivable of course that Abts had not considered the consequences of using a material of such thickness. It is the evidence of the handmade that arguably makes this work even more interesting than reproduction might suggest. END_OF_DOCUMENT_TOKEN_TO_BE_REPLACED